‘Rosie’ Busby was remembered as he lived 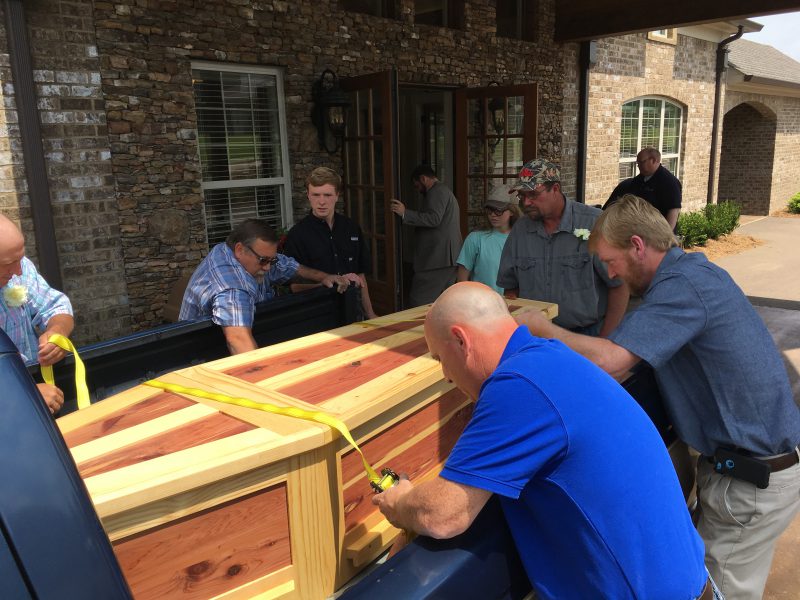 Family and friends gathered at Coleman Funeral Home to honor Mr. “Rosie” Busby’s requests for a “cowboy coffin” and to be transported in his favorite pickup.

It isn’t every funeral in which the guest of honor is reposed in an old-fashioned, six-sided coffin, surrounded by the equipment and tools that were the focus of his life’s work.

But when Mr. Young Roosevelt “Rosie” Busby’s family decided to host his memorial service in the workshop adjacent to his Abbeville home, they asked Coleman Funeral Home to help plan the farewell.

The result was a reflection of Mr. Rosie’s life, from his favorite pickup, to his beloved “Poppin’ Johnny” tractor, to his penchant for cowboy movies.

When Mr. Busby died April 10 after a short illness, family members considered building one of those tapered coffins but weren’t sure it could be finished in time for the visitation to be held in less than three days. Technology and tradition met when a Google search came up with a New Mexico woodworker whose business is called “The Old Pine Box.”

“We knew what Rosie wanted as far as a coffin, and the first thing that came up online was in Albuquerque, and we called them,” son-in-law Richard Thomas said.

The craftswoman had such a coffin ready, but her normal shippers couldn’t guarantee delivery in time. Instead, Thomas, his son Adam, and Chris Busby’s son Jacob drove straight through the night to the Land of Enchantment to buy the six-sided, pine-and-red-cedar coffin, then turned right around and brought it back to Mississippi.

The whole trip turned out to be a treasured part of the threesome’s grieving.

“All the way there and back, we conversed about Pop and some of the funny things he did,” Richard Thomas said. “Basically we just thought about him and the crazy things each of us remembered. I think the trip did us all some good, separating us from the day-in, day-out, and letting us have time together.”

Even at the visitation and viewing – an otherwise traditional event hosted at Coleman Funeral Home of Oxford – Mr. Busby was dressed in work clothes and a Caterpillar ballcap rather than a suit and tie.

“That’s just who he was,” Chris Busby said.

The day of the funeral brought more elements unique to Mr. Rosie’s way of life. He had asked that, in lieu of a hearse, his body be carried in the back of his 1986 Ford pickup. After friends helped secure the coffin to the truck bed, Chris Busby drove, tailgate down, from the funeral home to the shop. 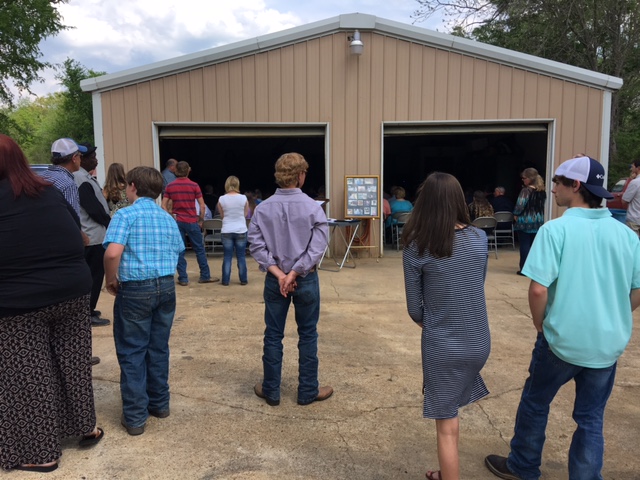 Neighbors and friends gathered at Mr. Rosie Busby’s shop for a funeral that was marked by emotion-stirring songs and laughter-producing stories.

“We didn’t have an actual procession, but when other drivers saw the coffin in the back of the truck, they didn’t want to pass,” Chris Busby said. “He would have liked that.”

The shop was cleared for seating to accommodate the overflow crowd that came to Mr. Rosie’s service, conducted by the Rev. Randy Hope. Mr. Rosie’s antique John Deere and the trackhoe that Chris Busby used to dig his father’s grave sat just outside, in homage to the man who had worked with and repaired them for decades. Friends and family filled scores of seats in the metal building, and at least as many people stood outside, respectfully listening to the service.

“It was just like Daddy would have wanted it,” Chris Busby said.

Several songs and stories invited both tears and laughter – including one recollection about a mischievous grandson who shook up a beer before handing it to his grandfather. With the sharing of such memories, some said the funeral felt almost as though Mr. Rosie were still there.

“Honestly,” Richard Thomas said, “it was just like another day hanging out at the shop with him.”

“We want to feature their music, their stories, the things that were important to their lives,” he said. “And the next time we have a call for a cowboy coffin, we’ll be ready.”

2 thoughts on “‘Rosie’ Busby was remembered as he lived”